Well, How 'Bout That

In the last post, I said I'd replace the broken shingle on the west middle dormer if I could find my spare shingles. I didn't want to waste a lot of time that could be better spent actually working on the house.

Well, I soon thought better about it, and realized that even though it's up high, it is the front of the house, and it really needs to be done. So I resolved to dig through the garage until I found the stupid shingles. As I suspected, they were buried in the farthest extent of the garage, with the spare restoration glass and the complete window that used to be where the kitchen pass-through is now. It only took half a day to disinter them, and I'm nearly through putting everything back; it should only take another hour or so.

At first I considered just splicing in the missing part, as I did with the apron on the east window casing on the south side, because I was afraid of splitting the shingle above the damaged one if I replaced the shingle entirely. After thinking the situation out, I realized that even if I did, the job would still go much faster and would also look better when it was done. So with an X-Acto knife I freed up the head of the nail going through both shingles, and then I coaxed it out as gently as I could. 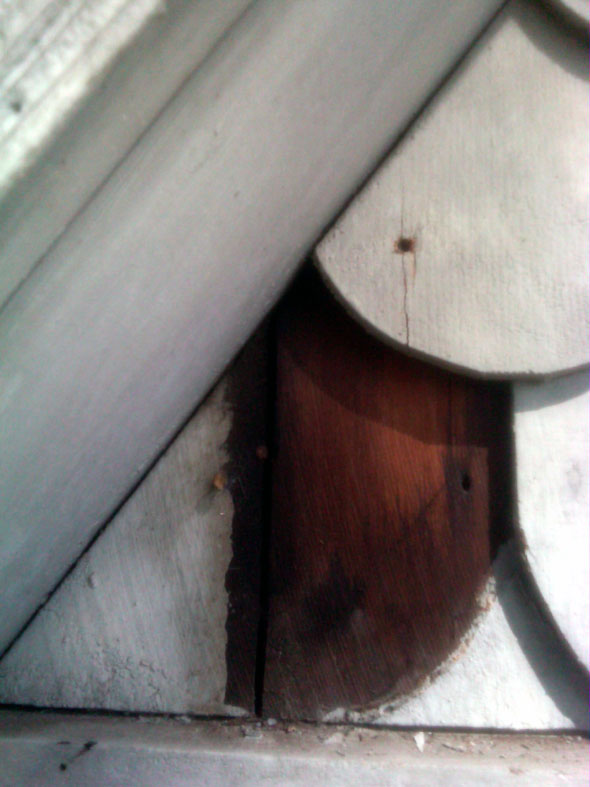 Yep, I cracked the upper shingle; the nail was simply too firmly attached to the wood from oxidation. After all, they had been together for 117 years or so. And speaking of that, I must tell you I can't help but get a bit solemn it such situations, because I realize that I'm looking upon something that hasn't been seen by human eyes for well over a century. Just slightly batty? Sure, but that's what it took to have bought the Farm House in the first place. 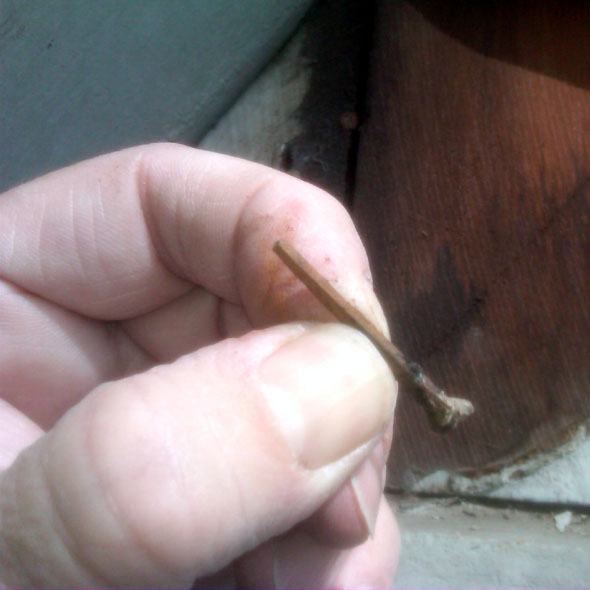 Oh, and take a look at the nail I removed. Note its rectangular cross-section. This is a cut nail, so called because it was cut from a strip of steel (which is why it only tapers along the wide dimension). They weren't originally blunt like this; the tip has rusted off. It's hard to tell in this picture because of the debris sticking to the nail, but the head was formed, basically, by squashing the end of the strip together during its manufacturing. Cut nails, although still available today, were in common use roughly from the early 19th century to soon after the Farm House's founding, so when I find them I can be reasonably certain that I'm working with the original construction. 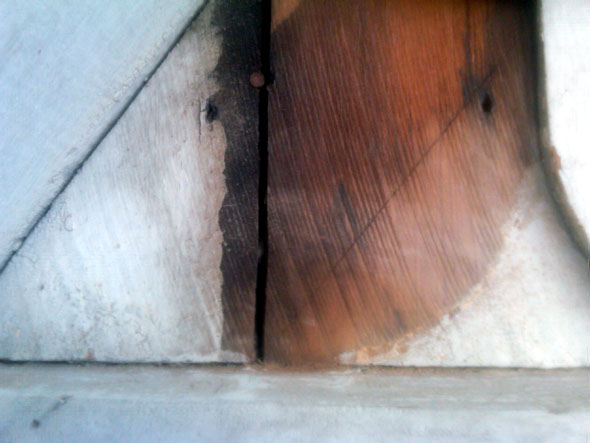 While we're on this sleuthing tack, take a look at what became clearly visible when I began to sand the wood exposed by the removing of the broken shingle! Yes, it's a pencil mark, parallel with the roof line, clearly drawn by the carpenter who laid out the shingles. Awesome.

In order to measure the new shingle for cutting, I made a paper pattern. I have a big roll of thick kraft paper I got from Uline along with an inexpensive dispenser; it has proven its handiness on at least a weekly basis since I got it, and I highly recommend it if you have the room. Anyway, first I made a kraft-paper replica of an uncut shingle: 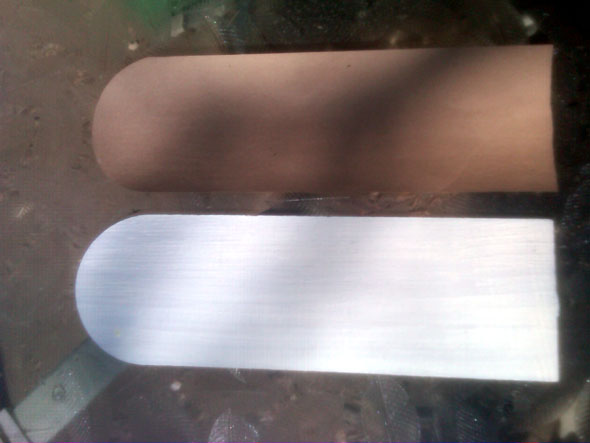 Then, I cut it down to the length necessary to accommodate the pattern, slid it in place behind the upper shingle, slid a bone folder (a popsicle stick will do nicely) along the diagonal where the shingle meets the eave, then took it out, folded it along that crease, put it back in to check fit, then adjusted it until it fit well: 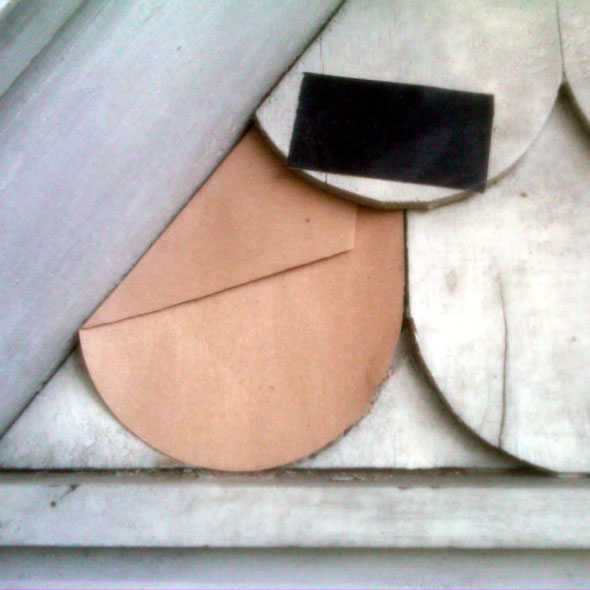 The black tape is there to keep the split shingle together until I can fix it.

The rest of the job was blessedly simple: cut the shingle and slip it into place. 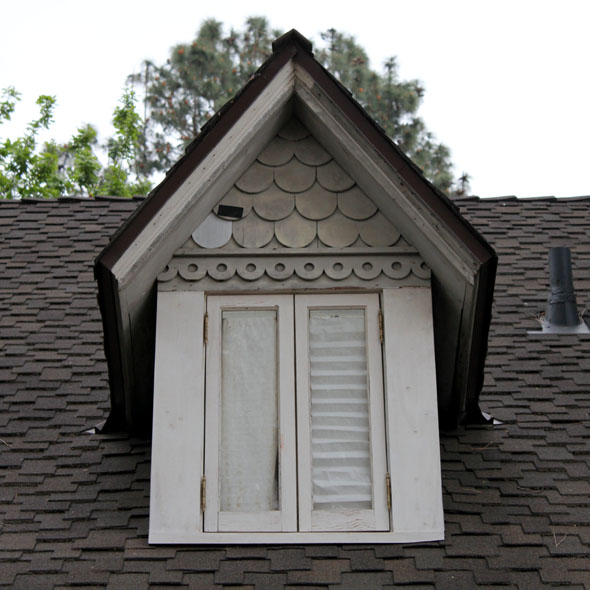 Perfect! It hardly needs nailing, but of course I'll do that.

Note something interesting about the shingle pattern in this gable: the size of the shingles, and the pitch of the dormer roof, cause each course to be a whole number of shingles, increasing by one shingle for each course. Perhaps this is a coincidence, but it suggests a purposeful relation between the shingle size and the roof pitch; otherwise, one would expect that partial shingles would be necessary to complete the pattern in places. I know that the foreman on the construction project mentioned that there was a complicated calculation necessary to plot the proper placement of the shingles. I'll have to look into this further.

Climbing back into the house after this triumph, I happened to look up into the eave. Here is what I saw: 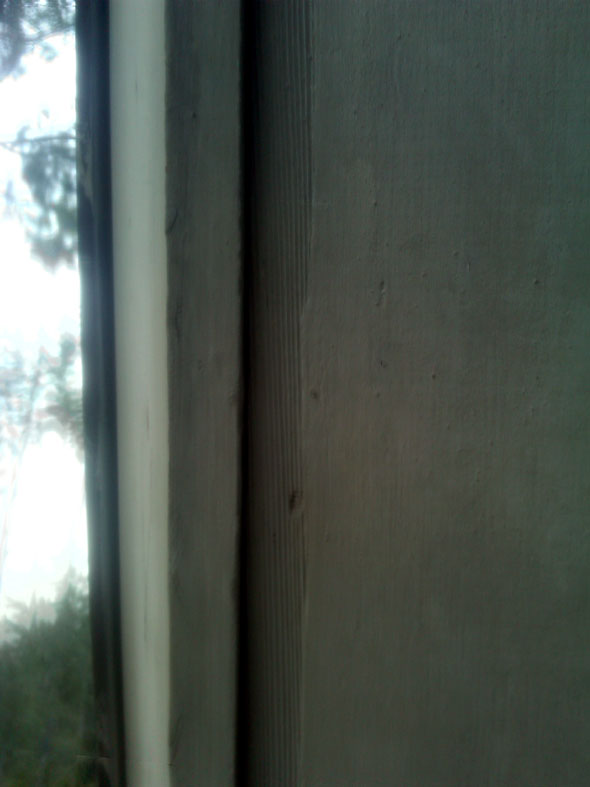 Funny I'd never noticed that particular pattern in the wood before; I guess usually when I'm out there I'm either looking down at the veranda roof or up at the house roof. In any event, this was a significant discovery, for it was evidence that, as I have long suspected, the front gables originally had bargeboards.

Now, I understand that these architectural terms I tend to throw around can be confusing, so here is what a bargeboard is: 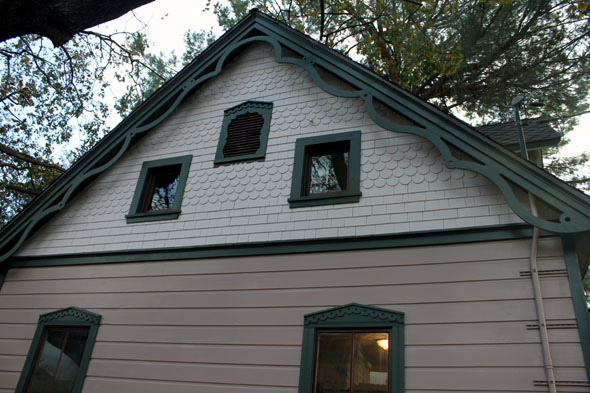 This shows the unmistakable pattern of a mounting block for the bargeboard. I can't believe I didn't notice this before, because as I said I suspected there were bargeboards in the front dormer gables, but better late than never.

This is quite a thrilling discovery, because the restoration of these bargeboards is going to make the Farm House even more beautiful than it is now. I'm not going to do anything about it until I'm completely finished with the exterior painting, but I'm going to take complete pictorial and video documentation of the evidence now, and I'm not going to sand out any of these marks, because when the time comes I'll have to bring this matter to the Cultural Heritage Commission for approval.

Whenever I begin a new segment of this project, my first impulse is to plunge right in and start whacking away at it. By now, fortunately, I've finally learned that before I do anything else, I must brush off all the loose dirt and debris and examine the areas to be painted closely, looking for anything beyond the usual sanding and patching that needs to be done before I paint. For the most part, this involves looking for any loose or damaged pieces that need mending. 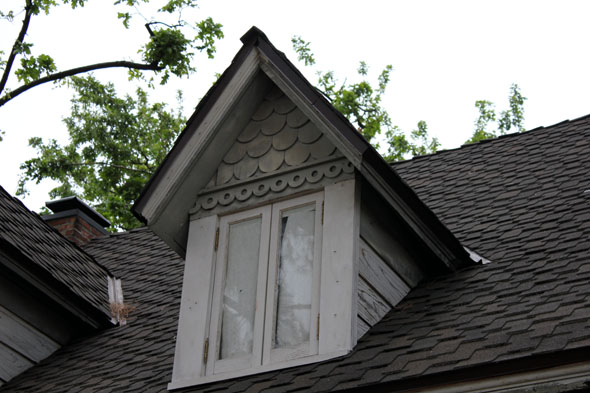 There is surprisingly little of this nature on the middle west dormer. There are in fact just two items, only one of which affects building health: a split piece of siding. 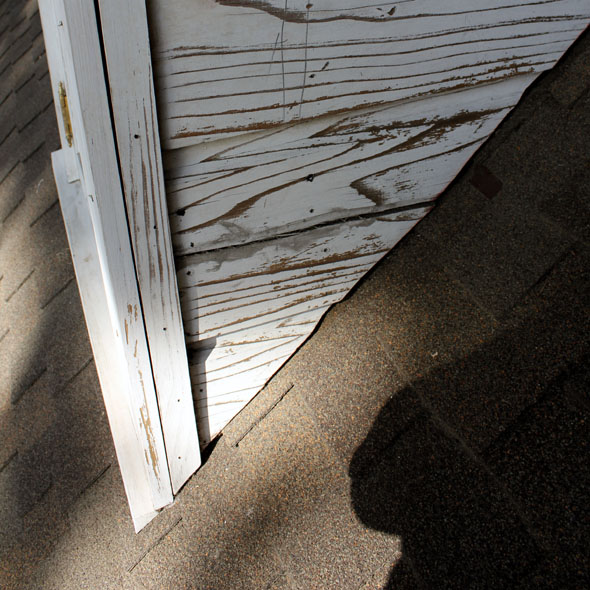 This split is complete, and the bottom half is somewhat loose. This allows the elements unauthorized entry, and must be repaired. I'll secure the loose piece, and fill the gap with epoxy putty.
The other item is merely cosmetic: part of a fish-scale shingle is missing. 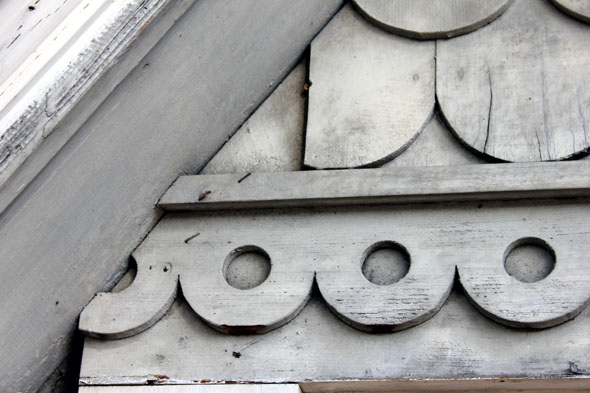 This doesn't compromise building integrity, so it is not essential that I repair it. I will if I manage to dig up my spare fish-scale shingles from the deepest recesses of the garage, but I'm not going to waste a huge amount of time looking. Time's a-wastin'.
* * *
Posted by Otis Criblecoblis at 11:11 PM 2 comments: 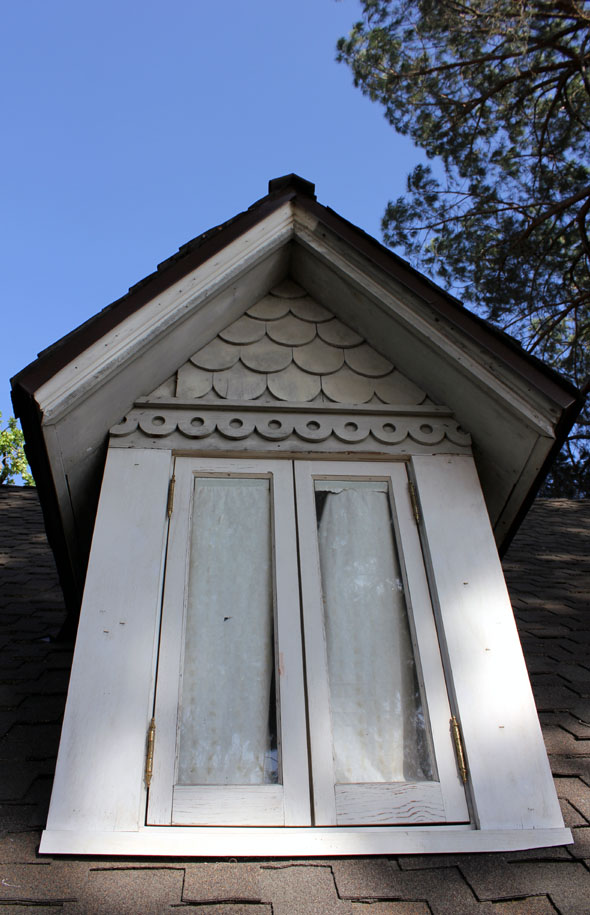 The center west dormer is next to be painted. While it needs a few repairs on the sides, and there will be some tight spots to get to where the dormer meets the roof, this should go fairly quickly, because it is small and I can reach everything readily except for the eaves in the very back. I'll fix that broken shingle if I can find my spare shingles, which is a big if.
The most complicated aspect of this job is that I will have to remove the sashes. There is simply no other way to paint the window jambs, or in fact the sashes themselves. It's a small opening, so I should be able to get away with taping some black plastic to the inside of the opening for a few days.
This will be an all-brush job, as will be all the dormers. There's simply too much risk of overspray getting on the shingles to use the sprayer. I have just obtained some new, stiffer brushes that I hope will yield a more satisfactory result than I achieved on the brushed parts of the south side using the kind of thick, instantly-curing paints that we are forced to use hereabouts nowadays by an overweening bureaucratic entity with no connection to the electorate.
Posted by Otis Criblecoblis at 11:57 PM 1 comment:

A Long Nightmare Is Over

The south side is done. 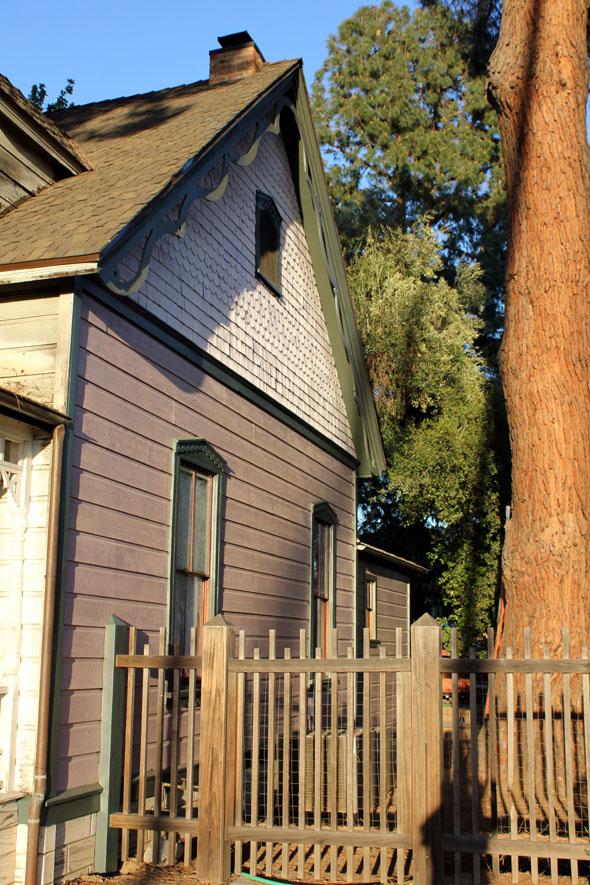 I will do the foundation at the end of the painting work all at the same time, because it will involve some civil engineering beforehand.
Posted by Otis Criblecoblis at 10:30 PM 1 comment: