I haven't written here for some time because I haven't been working on the exterior restoration. I've been taking some time to catch up on all the things I have neglected for the past several years while I concentrated on the restoration work.

In the process of doing these other things, the garage, my base of operations, fell into such disarray that when I was ready to return to the restoration work, I found that my workshop had assumed the character of an archaeological dig. It is only this past week that I have at last dug down to the stratum containing all the tools and materials I use in the restoration work, so I expect that I shall be back out on the veranda roof soon.

Of course, along the way unexpected things cropped up, as they always do with any house. One happened just last week that bears retelling here, for it touches upon a subject I have visited many times in this blog.

It was late afternoon, and I had just come back into the house from a long day out in the garage. I ran upstairs to put something in the bathroom, and when I got there I heard a noise coming from the vicinity of the toilet. It was an odd, mechanical noise, hard to describe, but it sounded something like this: whirrrrrr TIC. . . whirrrr TIC. . . whirrrrrrrr TIC, over and over, with the length of the whirr varying randomly.

As I got closer to the noise, it sounded as if it were coming from the toilet tank, but a quick check inside revealed that the noise was in fact coming from inside the wall.

This immediately put me in mind of something I wrote way back in the early days of this blog, in the post "The Farm House Speaks:"

We've all heard it a million times: "If these walls could talk. . . ." Well, walls do talk, especially in an old house like the Farm House. They tell many stories of the events they have been through and the people who have lived within them. If you take the time to understand what they are saying, you can learn a lot about the house's history;  more importantly, you may learn important things about its condition.

This particular wall, at this particular time, had an important thing to tell me about its condition: "I have a leaky pipe in here!"

While the noise sounded more like there was a time bomb in there, I knew it had to be a leak, because I knew that the only thing in the wall in that area was the water supply pipe for the toilet. I knew this because I was familiar with a photograph I took of this area from the adjoining room back when the walls were still open. 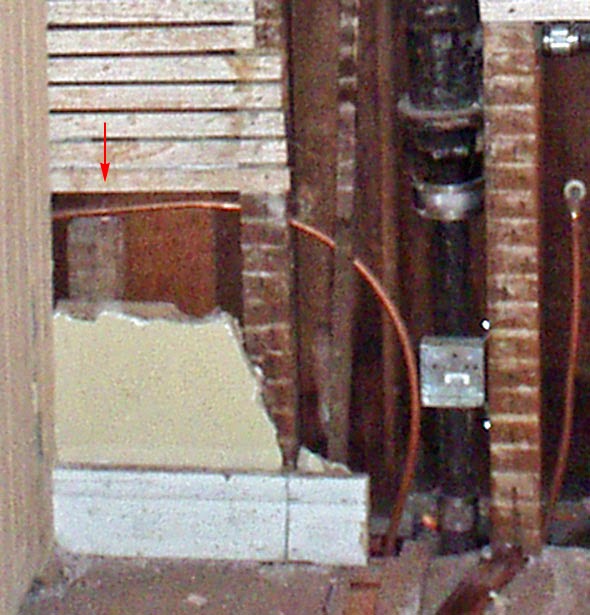 The picture is pretty fuzzy, because it was one of the first I took with the digital camera my friend Nik kindly lent me, and I still didn't know how to operate it properly, but it is nonetheless plenty clear enough to see the curved copper pipe heading over to the left and disappearing back into the wall; this is right where the noise was coming from, so whatever it sounded like, it had to be a leak.

Also clearly visible is a piece of wood that appears to have been wedged in under this pipe, and right above this piece of wood, barely discernible, is a copper strap (indicated by the red arrow) of the kind customarily used to keep a pipe in place.

That piece of wood bothered me: why, precisely, was it there? I could not help but conclude that the plumber who installed the pipe had stuck it under there, because he had reason to believe that the strap alone would not be sufficient to support the pipe. Moreover, the only reason he could have for this belief was the knowledge that he had not installed the strap correctly.

If this sounds unduly harsh or paranoid, please understand that I was merely drawing upon my long experience with this plumber's workmanship. He had a perfect record with all the fixtures he installed: he did every one of them incorrectly.

I had hoped that his in-wall work would prove to be better, especially because it had been subject to inspection and testing, but that aberrant piece of wood said otherwise. It had consciousness of guilt written all over it.

Of course, I did all this sleuthing and deduction later in the evening. The minute I realized there was a leak I called our plumber—or rather, I called Wifey and she called the plumber, because I'd just gotten a new phone and hadn't yet typed my contacts back in (for some reason, they never seem to transfer over from my old phone as they are supposed to). Unfortunately, it was past the end of the workday, and the plumber was not immediately available, so Wifey had to leave a message.

When she buzzed me back with this information, I filled up some buckets with enough water to get us through the night, then turned off the water supply to the house. I then went to the basement faucet, the lowest one in the house, and opened both taps. This relieved the pressure in the pipes, which stopped the leak immediately. Soon thereafter, the plumber returned our call; after I explained the situation to him, he said he'd be here first thing in the morning.

True to his word, he was. His dependability is one of the reasons why he is a valued member of the Farm House maintenance team; another is that he really knows his stuff.

We turned the water supply back on. Once the pressure built back up in the pipe, the noise returned. He was as baffled by its mechanical sound as I was, but he agreed that it had to be a leak, so he opened up the wall from the adjoining room to expose the area where the noise was coming from.

Sure enough, there was water bubbling out from under the strap. And just as I had suspected, the strap was not installed correctly. It should have been attached firmly to the wall with screws driven in all the way. This strap was only loosely attached, with the screws driven in only partway and at an angle. This is contrary to code, but I have already described how curiously tolerant the City inspector could be of our contractor's distinctive mode of operation at the darndest times.

It was easy to see why the plumber did it that way, because he screwed directly into the beadboard wainscoting of the bathroom, and if he'd driven the screws in snug they would have broken through the other side. What he should have done was to affix a small 3/4" thick piece of wood to the back of the wainscoting and then attach the strap onto that; that way, he could have secured the pipe properly without breaking through the beadboard. But that would have taken more time, and time is money, the kind that bites into a contractor's profit.

Having found the problem, the plumber was able to fix it in short order. After shutting off the water and draining the line, he removed the strap and the block of wood, cut out the damaged length of pipe, and spliced in a new piece of rigid copper pipe with soldered joints at each end. This gave the pipe enough structural rigidity that it no longer needed to be strapped to the wall.

It may be odd to consider any leak a fortunate one, but if there ever was such a thing, this was it: a mere pinhole, covered by the strap so that it did not spray onto the walls. Instead, it just bubbled out and dripped down onto the end grain of the wood underneath. The wood acted as a sponge, absorbing all but a very small amount of the leaked water and preventing any water damage. So that wood performed an essential function after all, although certainly not one the original plumber intended.

Why did the leak occur? The answer to this was immediately obvious to the plumber. It had to do with the incorrect way the strap was attached. The reason a strap must be securely attached to the wall is to prevent the natural movement that occurs in a pipe when it expands and contracts in response to temperature changes caused by the passage of water through it. The fact that this strap was loosely attached caused the copper supply pipe to move constantly with every variation in temperature over the eleven intervening years, eventually to come into contact with one of the steel strap screws.

One of the cardinal rules of proper plumbing procedure, and the reason why a loose strap is a code violation, is that copper-containing metals should never be allowed to come into contact with any ferrous (iron-based) metal such as steel. When this happens, corrosion occurs at the point of contact, which weakens both metals and eventually results in a leak. That is just what happened in this case.

All in all, this was a happy ending to what could have been a disaster. Of course, now I have yet another unexpected task, that of patching up the hole in the study wall.

But I'm certainly not complaining. This could have been a major disaster if the leak had been worse, or if I had not taken immediate action to stop it.

So, with this little incident in mind, always remember that the stories a house tells are not always historical in nature. Sometimes, they are breaking news flashes. Or, as I put it way back when:

Listen to your house, and it will keep you snug and safe for a lifetime. Ignore it, and it will surely find a way to get your attention.


For my part, I am now going to look back at all the other pictures I took when the walls were still open, to see if I can find any advance tips on breaking news flashes yet to come.

Posted by Otis Criblecoblis at 11:00 AM 7 comments: