Meanwhile, Back in The Present Day

I hope you won't mind a brief intermission in the trip down Memory Lane to report on some actual work on the house. 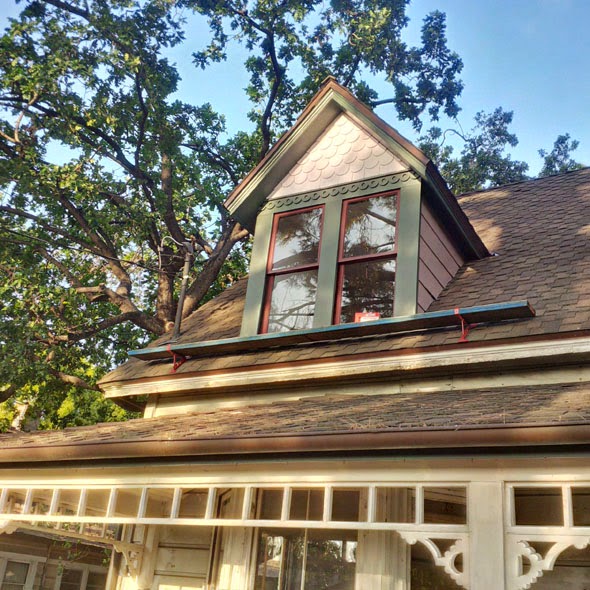 I'm not ready for a Before And After yet, because I haven't moved the scaffold over to the south dormer. I'll do that a bit later.

There's not much more to tell about the north front dormer work that I haven't already; most of it was the type of work I've described previously: a little patching, a little caulking and a lot of painting. There were nonetheless a few matters that merit discussion.

The sashes in this dormer were all replaced during the course of the contractor's work. At that time, I primed the outside, but not the inside, and most notably not the bottoms of the lower sashes. This is because traditionally these are painted the inside color, and I was planning dye stain and varnish for the inside. The problem with this is that ever since then those lower sashes have been absorbing water every time it rained—not nearly enough to ruin them, but more than enough to cause water stains. 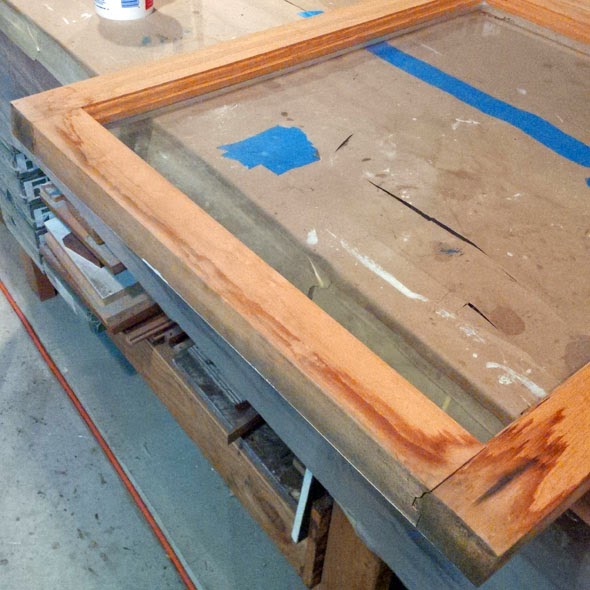 This would be no problem if I were painting the inside; I use a stain-blocking primer as a matter of course. But a dye stain would do very little to hide the water stains, even the dark stain I use. Thus, I had to bleach them.

There are several substances used to bleach stains out of wood, but for water stains, I've found that oxalic acid is best. This is because oxalic acid excels at removing iron-based stains, and most water stains are the result of iron in the water.

You will find oxalic acid crystals at a better hardware store, a paint store or a woodworking store, often sold as "wood bleach." Mixing instructions vary, but I strongly recommend the following method to prepare a solution.

First, let me caution you to use goggles and gloves when handling oxalic acid solution, and to add breathing protection when handling it in dry form (the crystals are highly irritating and become airborne easily). While it is not a terribly strong acid, oxalic acid is considerably stronger, and noticeably more irritating to skin and mucous membranes, than vinegar. Happily, it does not have an acrid smell, so you don't have to worry about breathing protection when handling it in solution.

To prepare a solution of oxalic acid, heat a quart of distilled water (the volume is not important, actually; a quart is simply a handy amount) to the temperature of very warm tap water, let's say 110-120 degrees. Then, using eye protection, breathing protection and gloves, slowly pour the oxalic acid crystals into the water, stirring well as you go. Make sure the crystals are dissolving fully as you go. When the crystals stop dissolving no matter how much you stir, you're done. You now have a saturated solution, which is in my experience the most useful concentration.

Put this solution in a stout glass or heat-resistant plastic jar with a tight-fitting lid, because when you're done bleaching your wood, you will find this solution very useful for getting rid of rust stains in concrete, porcelain, clothing, or for that matter anywhere else, and a little goes a long way. Mom always had a Mason jar of oxalic acid solution in the pantry for just this reason, and Grandma did too. It's really handy stuff.

While the solution is still hot, pour a small amount into a separate container, and using a cheap brush, brush the solution on the entire piece (or, as in my case, the entire area that is to be stained and varnished). If you don't do it all, you will have odd and quite distracting marbling effects which will look just as bad as the stains you are removing. Here's an example of this from the exterior side of one of the sashes: 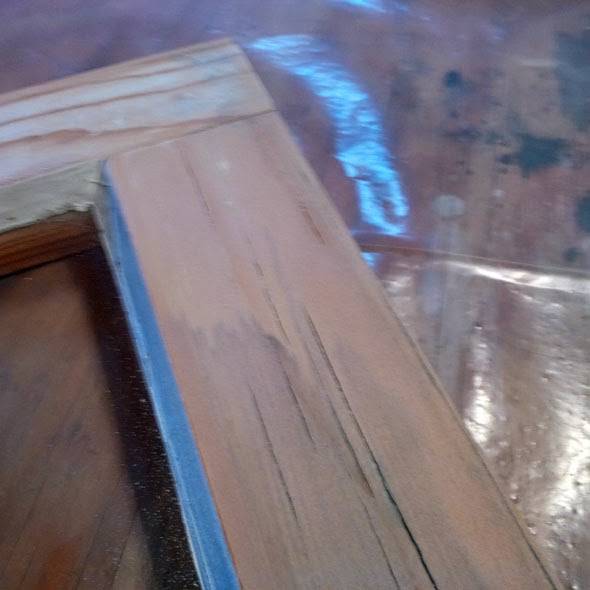 The lighter, more brightly-toned wood farther away from the camera has been bleached. As you can see, this method of bleaching restores the wood's natural color without removing the natural color variations of the grain, and the difference between bleached and unbleached areas is quite noticeable.

Do this until all the wood is saturated, but no further; if the stains are not gone in a few minutes, you can brush some more on the remaining stains. You may want to take a soft toothbrush and gently scrub stubborn areas. Now, let everything dry out. You may see some oxalic acid crystals on the surface of the wood, but even if you don't, they're there, so put on your breathing protection again.

Now comes the messy part: you need to flush the surface of the wood three times with distilled water in order to get all the acid out. After that, you need to neutralize the remaining acid by rinsing with a solution of one tablespoon of baking soda in three quarts of water.

After letting that dry, then sanding thoroughly with very fine (180-grit) sandpaper, only a few vestiges of the stains remained: 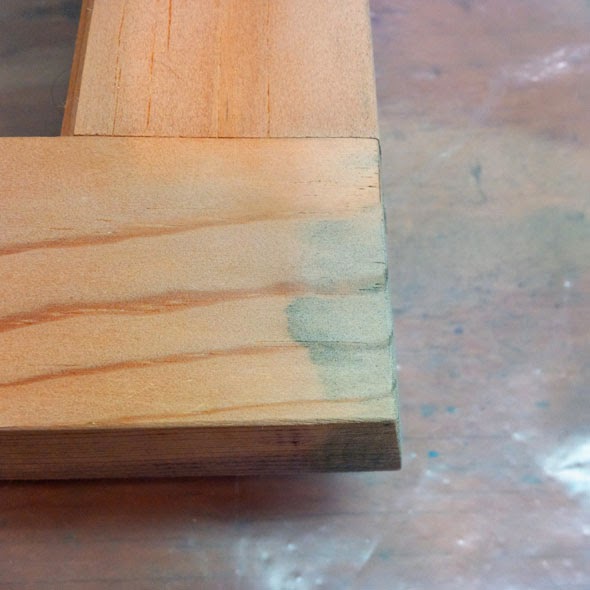 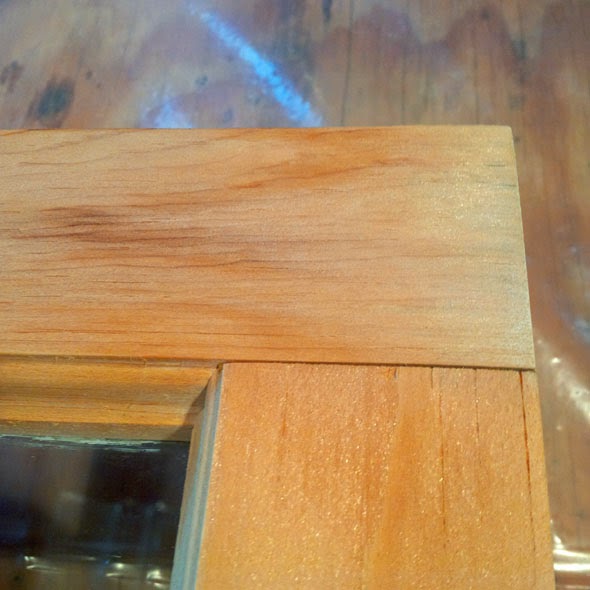 I didn't imagine this would be a problem, so I moved on to the staining and varnishing. I covered these processes in detail back in the day, so I won't repeat myself here. I do want to mention one little detail about the stain nevertheless.

You may recall from the Journal that I'm using a water-based aniline dye for most everything, and with no clear idea of how much I would need, made up enough stain to varnish a battleship, because I didn't want to have to worry about matching it later: 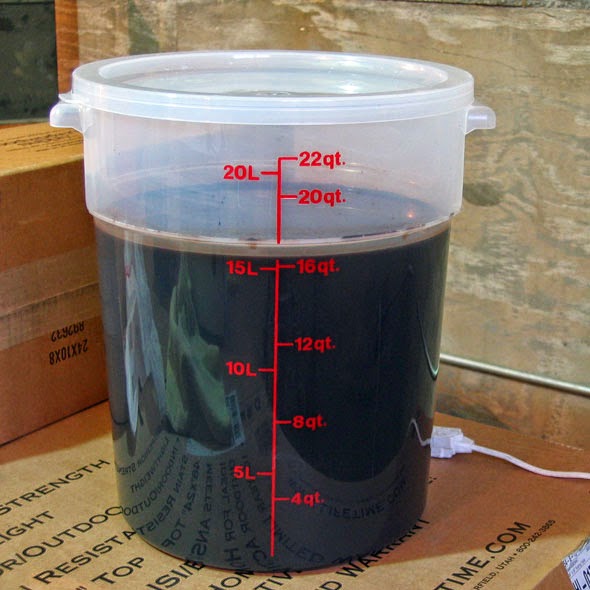 Of that vat of stain, I used a little more than a quart to do the kitchen cabinets and casings. I then put the vat away in the vast recesses of the Farm House garage until my next stain job. That having arrived, I retrieved the vat and got my first good look at it in a while. 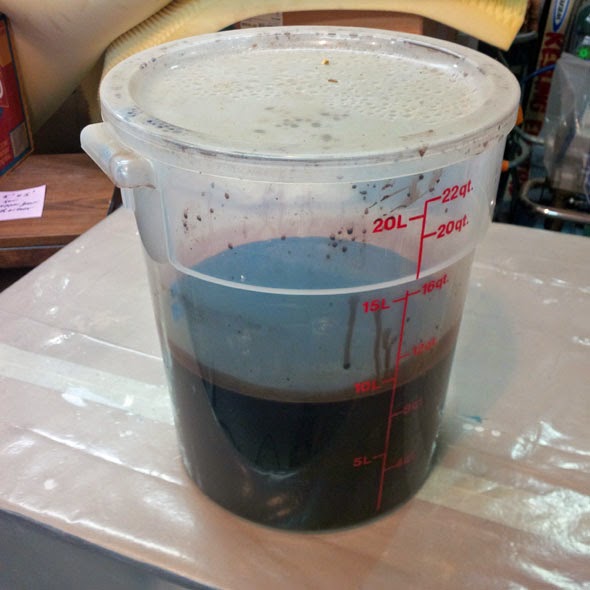 My previous worries about matching seemed silly now, but I knew that given the nature of this stain, if I could get it somewhere in the neighborhood of the original dilution, I could adjust it to match during the application process. I could see a faint shadow of where the water level was when the evaporation started, so I topped it up a bit past that mark with distilled water and mixed it well. As it turned out, it matched just fine without any fussing, and the finished sashes looked just as nice as the kitchen cabinets. 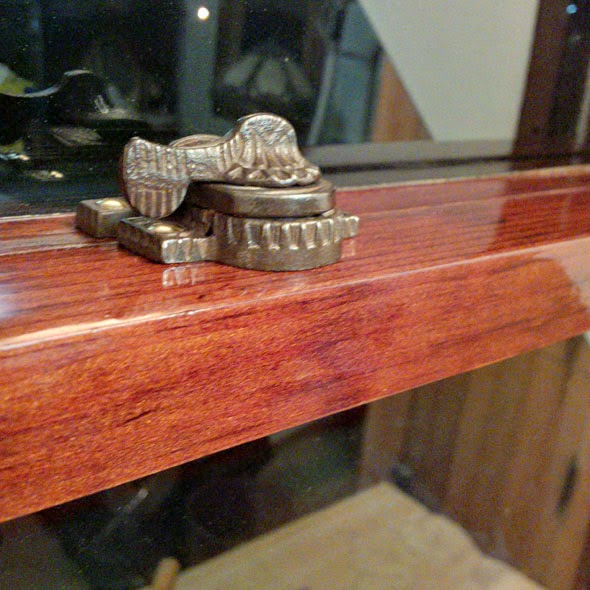 There was one problem, however. While the dye stain did indeed obscure the vestiges of the water stains, the structural damage from the water intrusion caused the wood in these areas to absorb the varnish considerably more thirstily than did the surrounding undamaged wood. I ended up having to apply an extra coat of varnish (four coats total, including the half-strength first coat), and even at that, I didn't get quite the film buildup I would have liked in these areas: 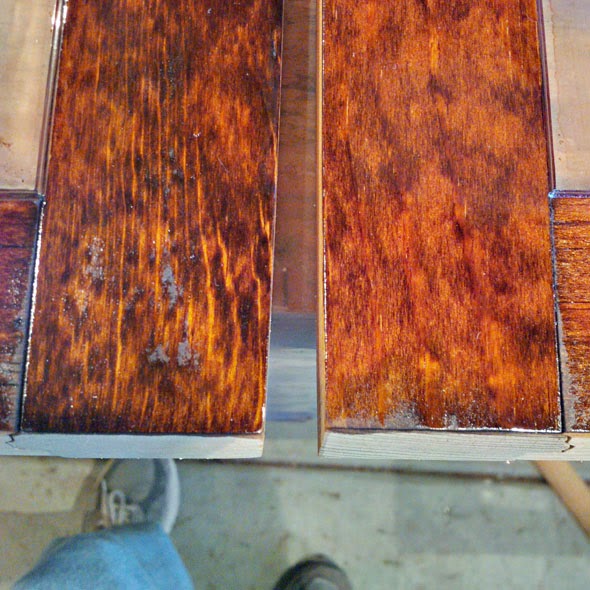 Fortunately, these flaws are not readily visible in ambient light (I took this picture in a way that maximized the visibility of the problem). Still, the next time the situation presents itself I'll have to figure out a way to correct for this.

With the sashes complete and re-installed, all that was left was the painting. The small areas involved called for the brush rather than the sprayer, but as I have mentioned, this new-fangled acrylic paint is so thick, and starts to dry so quickly, that it makes brushing with traditional water-base brushes extremely challenging.

Happily, brushmakers are finally catching up with the new trends in paint, and have begun to produce the kind of stiff, densely-packed polyester brushes this paint requires. I tried several different kinds, and found that the best for the new paints is the Proform Stiff. It had the best combination of stiffness and smoothness of application. With this brush, I was able to overcome many of the difficulties presented by the new paints. Nevertheless, I'd still rather be using a nice white China bristle with some good alkyd paint.

I've already started work on the south front dormer. I'm hoping I can get it done considerably more quickly than I did the north.

Posted by Otis Criblecoblis at 2:34 AM 7 comments: