I've finished the bathroom dormer, which means that it's time for my favorite feature, Before and After.

It's like magic! Decked out in proper Victorian livery, the ornamentation no longer seems arbitrary. Although there are four distinct colors there, the effect is to bring all the elements together as an organic whole.

Perhaps my meaning will be clearer if I show you a street view of the house: 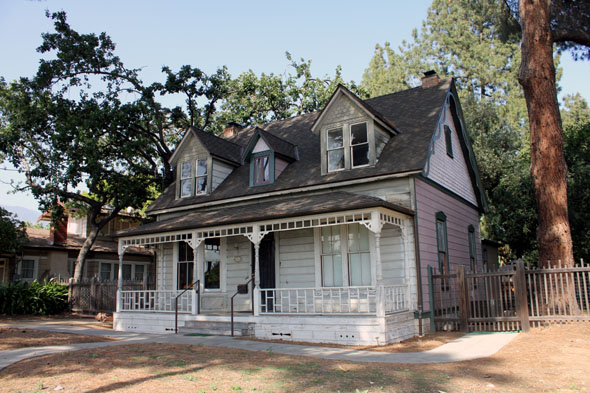 To my eyes, the center dormer now appears to be emerging out of the roof—an integral part of the structure—whereas the two monochromatic dormers appear to be sitting on top of it. Of course, the Victorians had their quite specific reasons for painting homes this way—they were the thinkingest people you ever did meet!—but the simplest way to explain it is that by echoing the design of the large main gables in the small dormer gables, and then by painting the corresponding elements precisely the same way, the dormers are integrated into the house, rather than looking like stuck-on appendages. Imagine how striking the effect will be once we restore the tiny little bargeboard that belongs in the dormer gable!

Prepping and painting this little dormer proved to be a great deal more difficult than I had hoped, in large measure because it was so fatiguing to stand on a surface that was sloping away from it. The fact that the surface was simultaneously sloping towards oblivion didn't help. Moreover, the rear of the sides was just out of my reach, and the peak of the roof was considerably out of range. I tried to access that area from on top, but I found working upside down to be dangerously disorienting at such a height. I thus had to work on this area—sanding, masking and painting—while hanging from the dormer roof by one arm. I'm particularly proud of the fact that I painted the top two courses of shingles freehand while hanging that way, cutting right up to the green of the eave and managing a straight line without masking. Did I say "proud of"? I meant to say "astonished beyond belief by." Really, I don't know how I managed that, given my general lack of equilibrium and my once-again-poor eyesight. Sometimes, very rarely, the Unseen Hand actually seems to help me out. The Unseen Hand has a sporting side, apparently.

I can't rely upon its continued assistance up where the blues begin, however, because the other dormers are considerably larger, and hanging from the roof ain't gonna get it done. 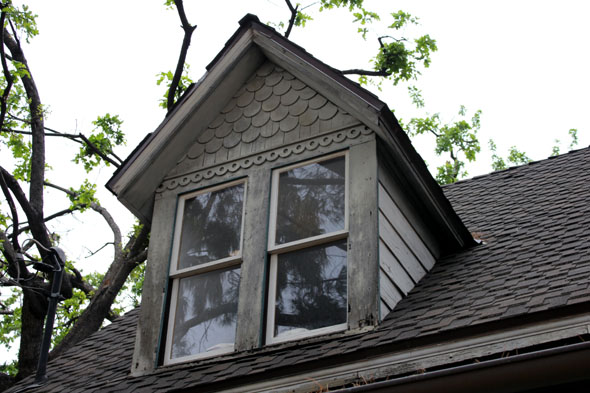 This is the north dormer, the next task on my list, and it's shown here in roughly the same scale as the smaller dormer above. You can infer from this that about 60% of this dormer is out of my reach, but it's actually more than that, because the veranda roof slopes off on the left side.

This is in fact a problem that has troubled me since I started working on the house eight years ago. It's taken me that long to figure out what I'm going to do: use roof jacks to support a scaffold plank, as a roofer would do, and wear a safety harness to guard against the very real possibility of falling. I have the basic materials, but I have yet to figure out the details.

While I'm doing that, there is a lot of work I can get done on the areas I can reach without help. While the bathroom dormer was in such bad shape that the sill and vertical boards had to be replaced, here as you can see the original materials are still present, and will need a lot of the same reconstructive work as I did on the window casings on the south side.

One difference here is that the vertical boards are unornamented; not only does that greatly simplify restoration, but it also allows me to use Bondo, which is considerably faster and cheaper than WoodEpox, and in this application just as effective.

So there will be lots of new ground to cover, cats and kittens, and I hope you all will find the proceedings to be interesting and informative. 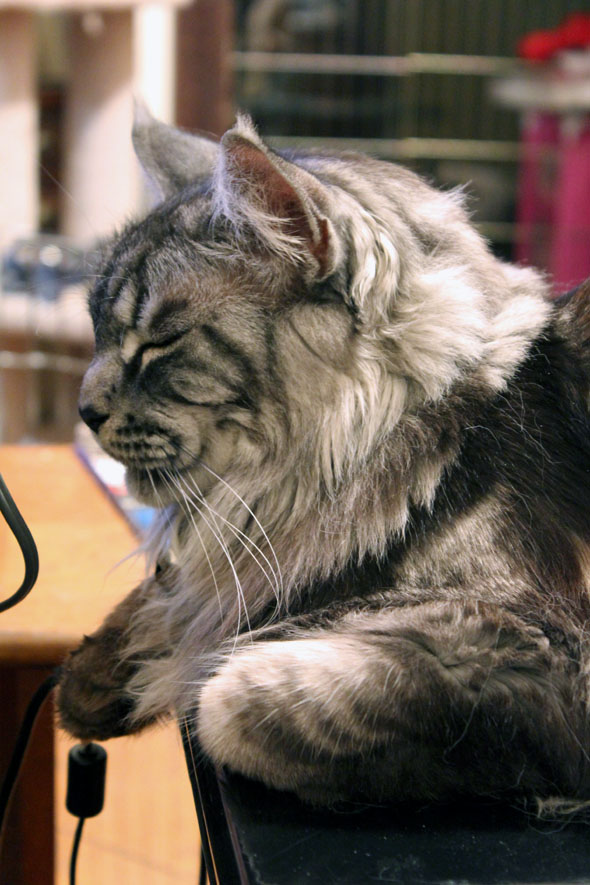 Posted by Otis Criblecoblis at 1:40 AM 11 comments:

Email ThisBlogThis!Share to TwitterShare to FacebookShare to Pinterest
Labels: Before and After, Preview, Theory

My Dog Ate My Paintbrush

It's been nearly a month since I last posted. At that time, I was fixing to mask so that I could paint the middle dormer. As I write, I have masked off the roof flashing, and that's it. It's not that I've been lazy, it's just that life and the weather intervened. Honest!

I've been working on the grading for a larger gazebo pad since February, whenever I had some time to spare, but the work got to a stage where the pups were starting to mess it up by their cavorting. And so, with the prospect of questionable weather approaching, I decided to give the gazebo project top priority until it was done.

The old gazebo pad wasn't large enough, and there was a lot of erosion towards the back of the lot, so I decided to double the pad's size and build a little frame at the low side to keep things level and neat. It was a lot of hard work, because I had to move a lot of dirt from elsewhere on the lot. I took it from the far side of the garage, where I need to do a lot of regrading anyway. 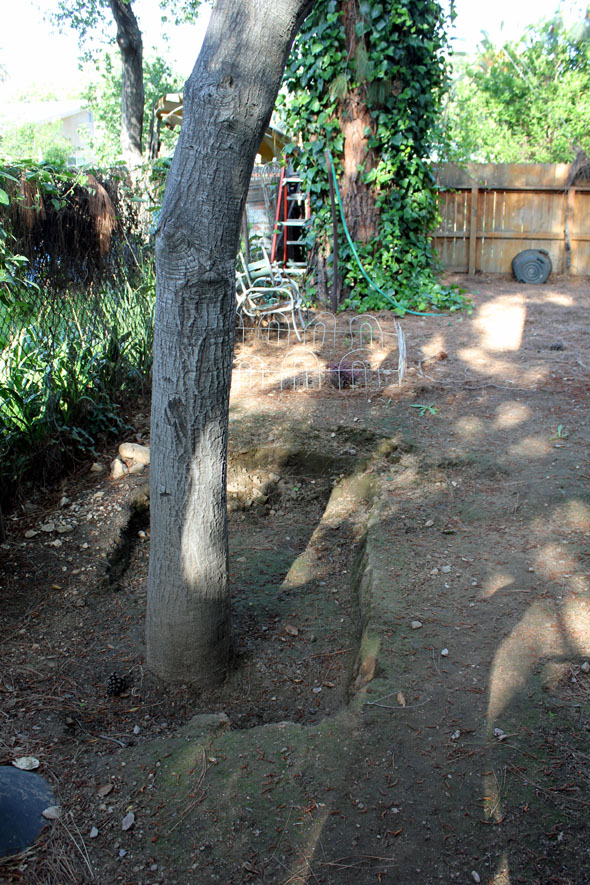 I finally finished it last week. I had planned to do some how-to posts on the surveying and grading, but I couldn't manage to make the telling of it anything but boring. Perhaps I'll try again later. Anyway, Wifey and I put up the new gazebo a few days ago, and here is the finished project: 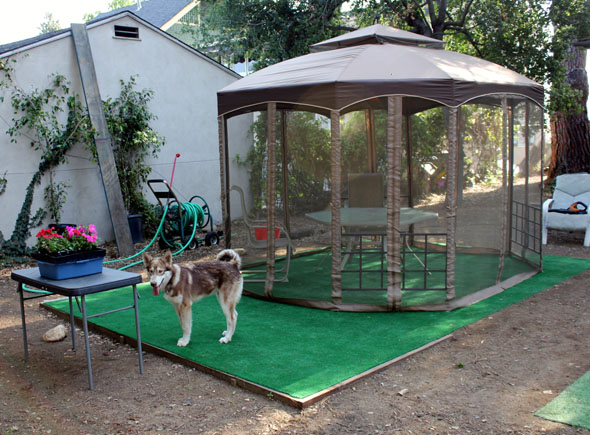 The pets of course all love the open area of fake turf.


The pups, Peter and Sally, are six months old now, and starting to look like half-sized editions of their future selves. 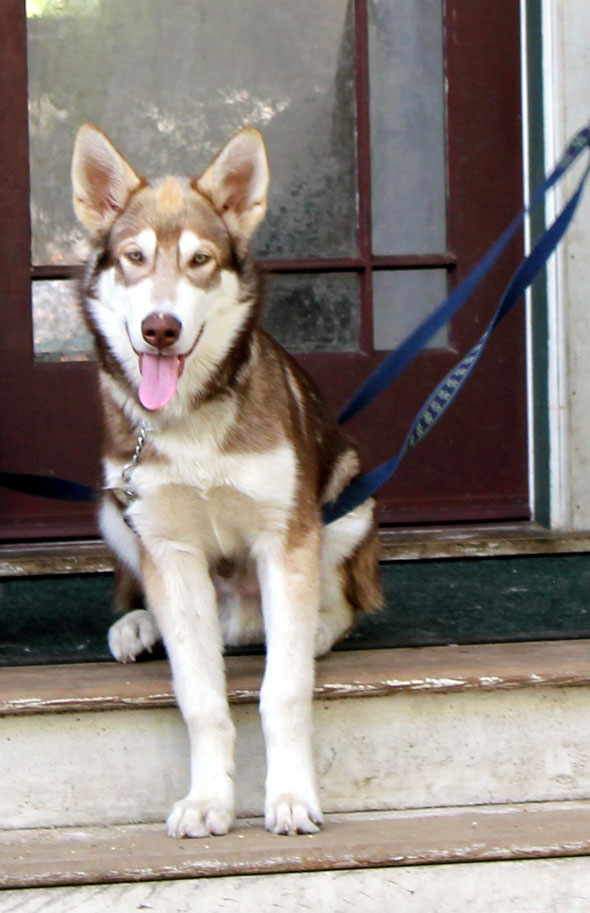 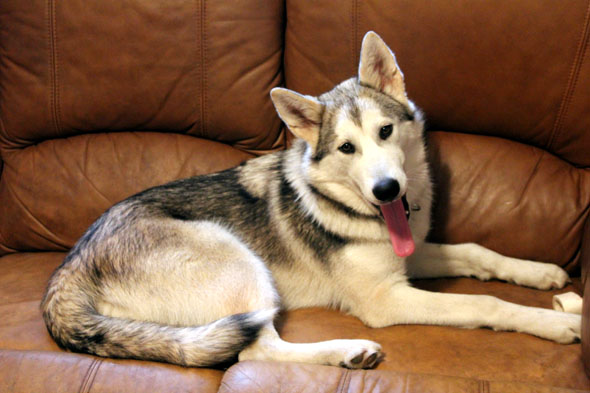 They've become significantly more well-behaved in the past few weeks, which is a fortunate thing, because they've entered another big growth spurt. Peter is going to be huge once he grows into those ears; Sally should end up to be about Nellie's size.

Oh, yeah, the painting. Anyway, the weather has been wet with annoying unpredictability and timing, which has either made it impossible to paint or led me to believe it would be impossible to paint. It looks like I've got some clear sailing now, however.