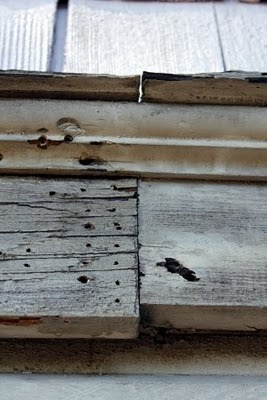 I've done what I can to repair the mess I showed you all in the last post. It's hard to tell from this angle, but if you compare it to the previous picture, you can see that it's a big improvement. Once it's all puttied and painted, it will look swell.
Except, that is, for the bottom edge. Both those boards are now firmly butted up against the piece above them, but the board on the left is apparently wider than the one on the right. One would naturally assume that this is evidence of a repair, but at its other end the board fits properly. If this were the result of a repair job, then, why would someone take care to do a neat job but not take the care to install a properly-sized board? Then again, why would someone build such an obvious discrepancy into a new house?
I think the answer to this riddle is simply that the house has changed shape somewhat since it was built. A lot of things can happen in 126 years, especially considering that the Farm House spent 118 of them sitting right on the ground. According to our building engineer, the ground under that corner of the house settled considerably; it seems likely that the trim piece to the left followed that downward movement, leaving its partner behind. I'm willing to bet that if I removed the trim pieces in front of these boards, I would find that the board the left piece is butted against has also shifted downward, and the left and right pieces are the same width after all. Supporting this theory is the fact that the trim pieces above the boards curve upwards to the right of the picture. In fact, I bet that these discrepancies are what first led the engineer down the path that ultimately led him to conclude that the house had settled in that corner.
We've all heard it a million times: "If these walls could talk. . . ." Well, walls do talk, especially in an old house like the Farm House. They tell many stories of the events they have been through and the people who have lived within them. If you take the time to understand what they are saying, you can learn a lot about the house's history;  more importantly, you may learn important things about its condition. The discovery that the house had settled so much in this corner pointed the way to repairs that were crucial to the house's structural integrity.
Listen to your house, and it will keep you snug and safe for a lifetime. Ignore it, and it will surely find a way to get your attention.
Posted by Otis Criblecoblis at 12:34 AM