Adult Education; or, A Chump Smartens Up

As I promised last time, here is the newly-repaired corner board: 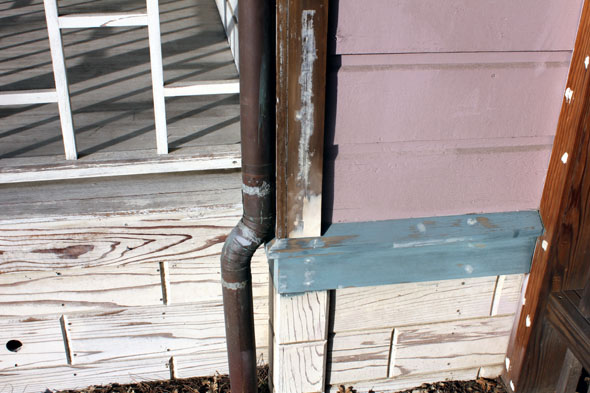 I had to use so much putty because, as I described last time, I did a quick repair. If I had done the by-the-book repair I described, I would not have had to use much putty at all; but then, I'd probably still be working on it.
Today, I noticed another repair that has come undone, on the east window casing: 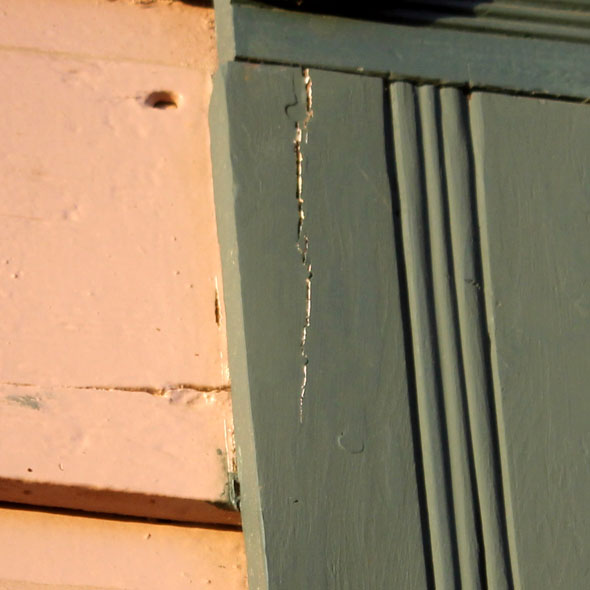 At first, I ascribed this to the various stresses caused by the windstorm, because of the slight circular protrusion below the crack revealing where a screw hole was patched. This indicates that the board moved inward relative to the rest of the house. Given that there's no evidence of anything having hit the board, this movement almost certainly was caused by the house's reacting to earth movement—and there was plenty of that during the windstorm.
Then, however, I noticed the circular depression up at the top of the long crack. Sure, one could ascribe that to the same cause, but something about that screw, and that crack, tickled my memory. I looked back through the posts until, sure enough, in the post "Onward" I found this picture: 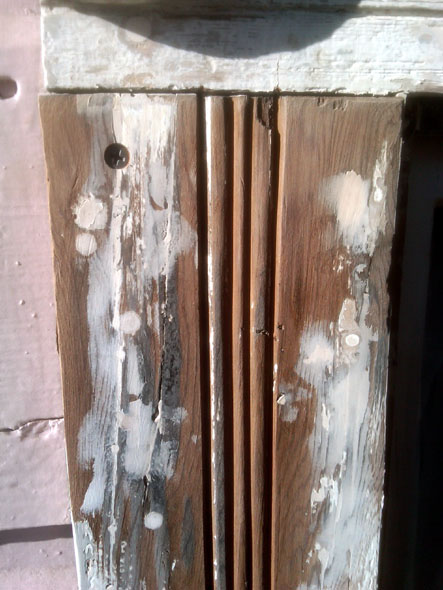 I included this picture in that post to illustrate how effectively the LiquidWood bonds wood together. The wood was warped outward, and where I placed the screw was the best place to bring the board back into alignment.
What we have here, clearly, is a Teachable Moment. And as with a schoolteacher back in the Old West, I'm sometimes only a lesson or two ahead of the class. The bulk of what I know about the home-improvement subjects I discuss herein I have learned from experience, and as you can see, the learning never ends. That's what makes life so fun.
What I said about LiquidWood was not wrong, per se, because the mend did withstand the screw's intrusion without complaint. Nevertheless, a mend is still a weak point in the wood's  structure; to counteract that, I would have had to impregnate the wood on both sides of the mend more thoroughly with epoxy, and further back from the mend line. As it was, the mend was already under constant stress from the wood's desire to return to its natural contour, and the added stress of the house's movement caused the mend to fail.
It is thus clear in retrospect that I should not have placed that screw right along the mend, but what should I have done then, and what should I do now to fix it?
To answer the first question: because the wood was warped and I wanted to bring it back into alignment, I should have been more thorough in impregnating the wood at the top of the board with LiquidWood, just to give it more strength and resilience. When bringing it back into alignment, I should have used smaller screws and more of them, placed more carefully back from the edges of the board.
To answer the second question: I think it's too late to depend upon epoxy saturation to keep the mend together, because there is now cured epoxy along both sides of the break. The best thing to do for the good of the house would be simply to replace the board, but that isn't going to happen. So I guess I will have to remove the offending screw, re-mend the crack, bring the piece back into alignment with smaller screws placed carefully to the right of the crack, patch it up, and see what happens. The worst that can happen is that I learn some more stuff.
Posted by Otis Criblecoblis at 1:48 PM