I'm nearly done rehabilitating the casing boards. It has been a long, tedious, boring job, so I'll spare you the play-by-play and just hit the highlights, the processes I haven't already covered that may prove useful to you when working with putty.

The long, boring part of the work involved many putty/sand cycles. I went slowly and carefully because I wanted to be sure I simply filled in the divots and built up the corners without removing any wood. Because WoodEpox is harder than redwood, it's extremely easy to blast right through the putty and sand a nice divot into the board before you know it, and a pain in the neck to fill that divot back in. Ask me how I know this. Actually, don't.

In due course, I had patched the boards so that the divots were all filled up—at least, all the divots I could see—and the corners were all built up. I was nonetheless not yet ready to prime the boards. Before I did that, I had to check the boards' dimensions to see if there were any obvious thin or thick areas. As it turned out, there was one of each. 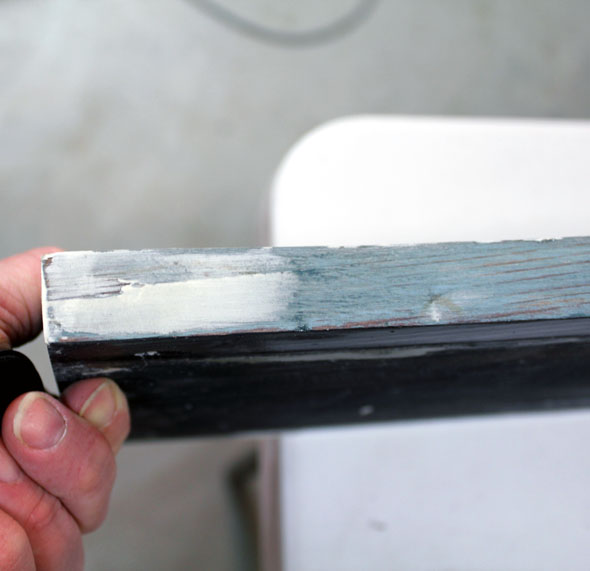 Here's the thick area, on the corner of the board (to the left in the photo). This occurred because of a lateral split that occurred sometime in the past. Instead of gluing the crack back together, the previous workman simply filled it with patching material.

The thin area was also very obvious, although I could not get it to show up clearly in a photograph. Near the bottom of the left board, the thickness came down to a half-inch along about a six-inch area. When I measured along that entire side, I found it was actually worn down to 3/4 of an inch (recall it's supposed to be 7/8") for nearly 2/3 of its length. After some more investigation, I discovered that the wear pattern was barely visible. Here's a picture of the boards at this point in the work: 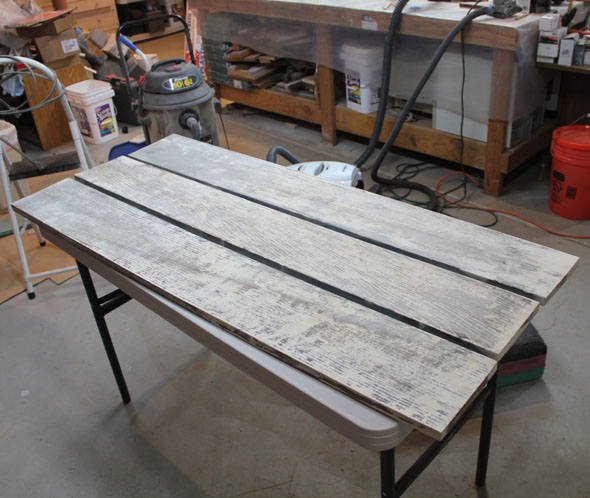 If you look at the board closest to the camera, you'll see vaguely a straight line running diagonally from the near edge about 2/3 of the way up to the left across to the far edge at the bottom. The triangle thus described marks the worn-thin area of the board. It's a fascinating wear pattern; the only cause I can think of for it is wind abrasion, but I can't imagine how that could cause wear in such a geometrically regular pattern. This is one of the most baffling stories I've seen the Farm House tell, and one of the most subtle.

It would be ridiculous to try to patch this huge area, and in any event it's such a subtle fault that I am sure it will not be visible. I thus undertook to patch just the little valley within this area where the thickness goes to a half inch, which would be visible. I clamped a strip of wood onto the edge to provide an aid to patching, and a photograph of this serves to reveal the thin area: 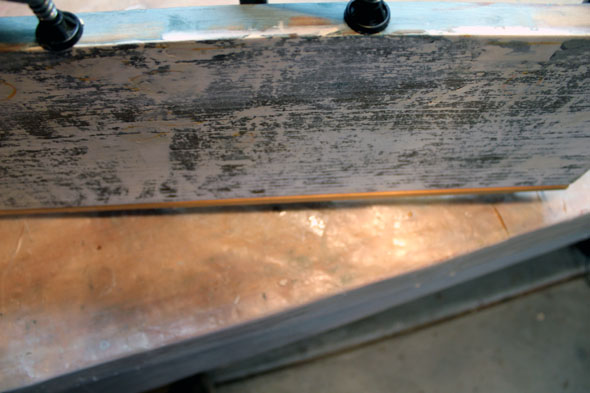 The strip of wood is level with the edges of the valley; where the side of the strip is revealed is where the thin area is.

By the way, this illustrates the real difficulty in rehabilitating old worn boards. It would be a fairly simple job if the board only had divots to fill; it's the inevitable alterations to the original dimensions (the warping and large-scale physical damage) that make the job a pain in the neck. Rather than patching and sanding flat, which is the natural inclination, I have to be sure to patch and sand along the contour of the wood, lest I create more thick or thin spots. This aspect of the work will come up again when I re-attach the boards; I'm hoping that step will not reveal any new faults. Here's the completed patching of the valley. It went fairly well, considering that it is quite difficult to feather in large areas with WoodEpox. As dense as this putty is, it doesn't lend itself to smooth application in thin layers, and on top of that, thin layers take a long time to cure because of their small mass. As a bonus, you can't use a blow-dryer or heat gun to speed curing in such cases, because the wind action blows holes in the thin layers of uncured putty.

This is not a problem during the day; out in the hot summer sun, the putty cures in an hour or so. At night, however, the wait can be annoying. I thus cast about for methods of artificially heating the wood to speed things up. I hit upon the idea of using a heating pad. 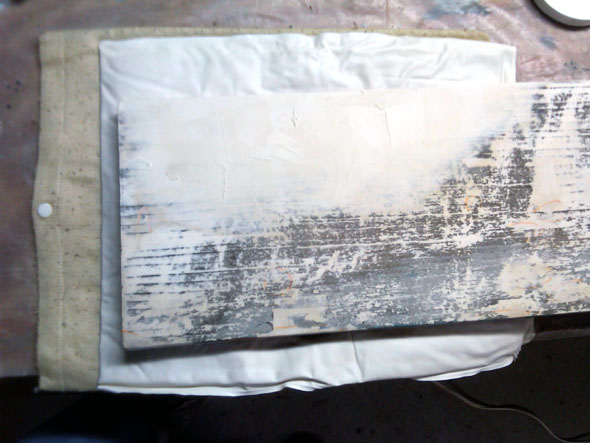 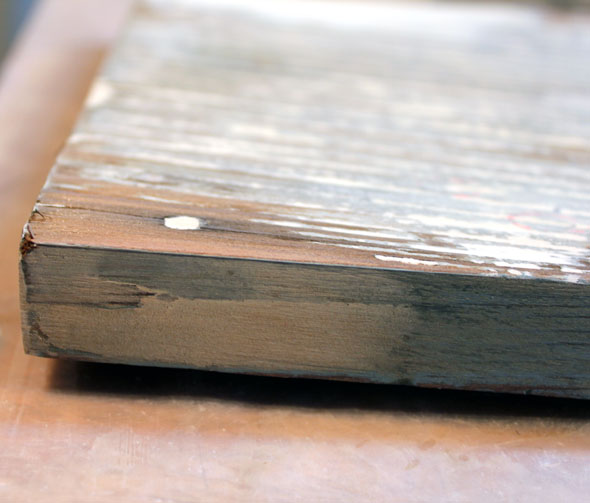 Correcting the thick area was naturally much simpler; all I had to do was to sand it down carefully until it was the right thickness. This did unfortunately reveal a submerged crack which I had to repair. From what I've already taught you about the language of houses, you can read from this picture that this whole problem was caused by a nail driven too near the edge without pre-drilling.

At that point, it was time to prime. For the first primer coat, I use an untinted, thinned primer so that I can see through to detect any underlying problems, and so that I can sand down any remaining high spots easily.

I always know that no matter how careful I am to patch every little divot, the first priming will reveal some significant ones that I missed. This time was no exception: So it was time for one more cycle of patching and sanding. Since it was evening when I started, I wanted to find some way to speed up the curing, but I'd already determined the heating pad method was too slow. Casting about for some better idea, I hit upon the Easy Bake method. 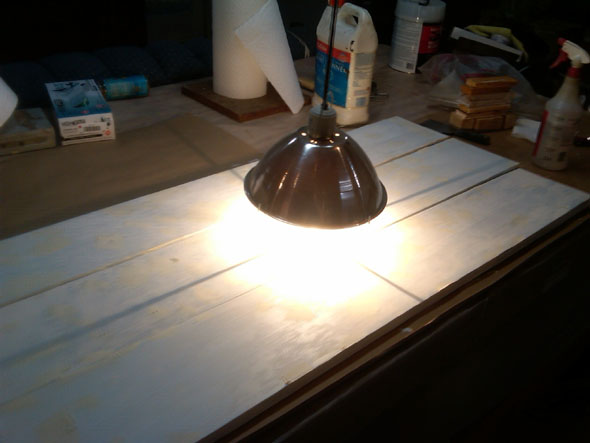 A 300-watt light bulb generates a great deal of heat. I'd hung this work light up temporarily to throw more light on things, and as I stood there cogitating, I felt my brain begin to heat up. It wasn't the cogitating that did that; it was the work light immediately above me. With a light bulb directly above my head, conditions were ideal for me to have an idea. So I brought the work light down until its protective cage nearly touched the wood.

As it turned out, this was too close. 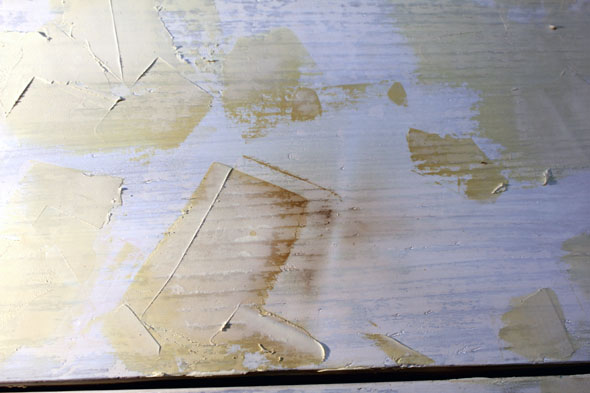 After some further, more careful experimentation, I found that moving the fixture up until its cage was a foot away yielded the best results. Moving the boards around every 10 minutes or so under the light, the remaining un-scorched epoxy cured in about an hour.

After this, I sanded down this last pass with minute care. I used a small piece of fine sandpaper without a block, folded in thirds, so I could feather the edge of each patch into the surrounding area. For this pass, I had a clear indication of when to stop, namely when I started to sand through the primer. When you get to the final stages in a complicated patching job such as this, you have to be careful not to create more irregularities than you fix; if you don't sand off all the excess putty and feather the edges of the patch into the surrounding area, all you achieve is to replace small divots with large bumps. Of course, this is true whenever you patch, but until you apply the last coat of primer you still have a chance to fix any problems from earlier passes.

In any event, once I had the boards all sanded smooth and thoroughly dusted, I applied the final, tinted coat of primer. 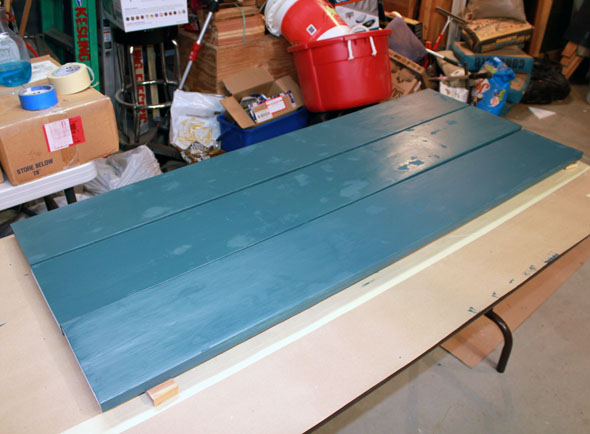 Once the "final" coat dried, it was painfully obvious that I was not done. As you can see, despite my final patches' flatness, they are still telegraphing through the paint because of their decreased "holdout", or saturation, of the primer. This angle actually minimizes this problem; it does not show patches that are behind both coats of primer, which are also telegraphing through the paint, but to a lesser degree. Let's take a closer look at the boards: 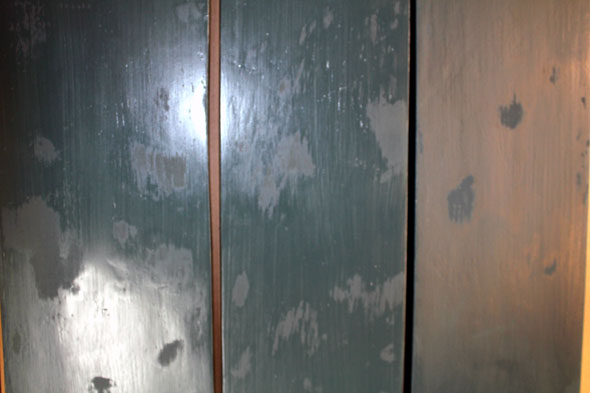 As you can see, there's a lot of stuff going on here: wildly differing areas of holdout, remaining minute divots too small for the WoodEpox effectively to fill, and small valleys from weathering and uneven sanding. A few coats of the finish paint will mask these irregularities somewhat, but it will not eliminate them.

I didn't expect I'd get these boards looking perfect, but this will not do. I try not to let my ego get the better of me, but I didn't put all this work into rehabilitating these boards only to have them come out looking so crummy. Besides, the Farm House deserves better.

Duty and honor thus compel me to employ my secret weapon to put the final finish on these boards: Brushing Putty.

Posted by Otis Criblecoblis at 2:16 AM