I Haven't Got Time for The Pain

If you all learn only one thing from my efforts herein, then let it be this: don't rush. Or, as my wise supervisor used to tell me constantly when I worked at a Japanese bank, no lush! Honest, she really did, and she was definitely on to something. Now, I never got hurt rushing around dear old Dai-Ichi Kangyo Bank, but I was young and ept then, and could see what I was doing. Now that I am older and increasingly eptness-challenged, and my new contacts are giving me hell, I constantly find myself outrunning my headlights, and damaging myself thereby.
The latest instance of this occurred last night, when I was rushing to do my chores and ended up (Lord, this sounds stupid) gashing my finger on a tape dispenser. Now, in my defense, it is a huge dispenser, for packing tape, and the cutting blade is savagely serrated. Nevertheless, it only happened because I was in a hurry. The irony of it is that the injury occurred when my finger got stuck between the blade and its safety guard; if it hadn't been for the guard, I would have gotten off with a light scratch, if anything.
In any event, I've had to put myself on the DL, at least for today, just to give the finger some time to stop throbbing and me some time to find my danged finger guard. So that means I can bring you all completely up-to-the-minute on the thrilling restoration of the east casing!
After installing the rehabilitated right cap piece, the next step was naturally to patch the left cap piece. Actually, I began to patch it before installing the right piece, because there was a big gap on its underside that I wanted to patch in order to immobilize it while avoiding the driving of more nails, and I wouldn't be able to do that with the right piece in. In the process, I immobilized it in the wrong position, out of vertical alignment with the right piece. 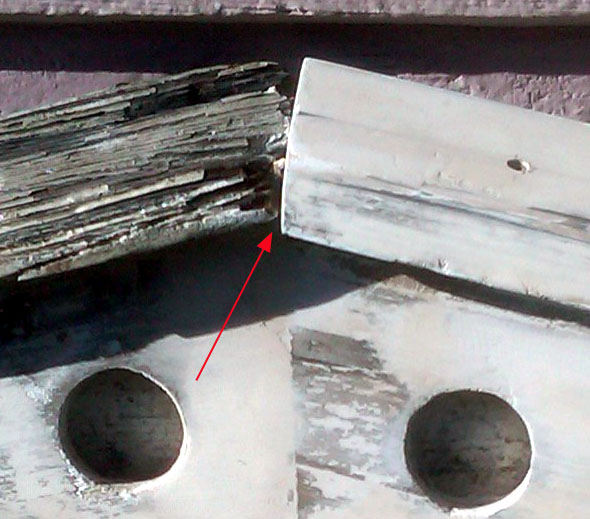 The misalignment is most evident where the arrow points. Actually, I rather lucked out here, because the upper side of this piece at this point is so worn by time and the weather that had it lined up properly on the bottom, I would have had to raise the upper plane of the piece along much of its length by this much to make it match up. That would have involved significant amounts of time and putty. This way, the top lines up nearly perfectly, and I only have to build up the small exposed area of the bottom plane for about a quarter of its length in order to make the cap pieces line up visually. This involves considerably less work, and very little putty.
I'm trying a new method of patching when I must re-establish missing edges. As I've mentioned, this kind of work takes several passes with the putty, because the edges must be built up along the intersecting planes that define them. Up to now, I've sanded after each pass in order to see clearly where I must patch further. When I was less experienced at this task, I needed to do it this way in order to keep track of where the edges were; as I gained experience, I kept doing it this way because I thought it used less putty.
I have however begun to suspect that I'm not really saving that much putty this way, and I am sure that repeated putty/sand cycles take a lot of time. I am thus experimenting with making successive putty passes until I've substantially completed the task of building the piece back up, and then sanding back to the desired profile. In this way, I hope to limit the sanding passes to three at the most. I expect this will save time because I won't have to wait until the putty is completely cured before doing the next pass, and because fewer sanding passes will take less time as a matter of course.
Here is where I'm at with the left cap piece using this method: 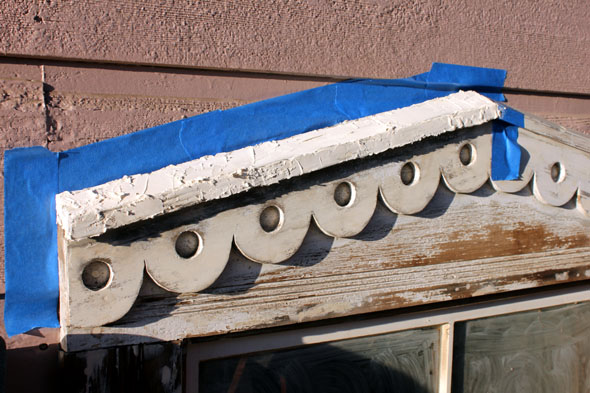 It's substantially built up, but not completely so. At this point I need to sand back to profile in order to ensure that the lines are established so as to line up properly with the right cap piece. Note that I've masked off the right piece in order to prevent altering its already-perfected profile. I'll have to sand with great care at the junction.
I've also been working on the sash, and that hasn't been going so well. This time, I planned from the start to use the guide form method I devised while patching the sash on the west casing. That time, I had both ends and the middle established, and only had to fill in the divots and establish straight edges; this time, I foolishly only established the ends, and applied the forms with no place in the middle to apply a clamp. This allowed the forms to bow outward in the middle, so I had to hold them in more or less the proper place as I did the first pass, let this pass cure fully, and then clamp in the middle for the second pass. This worked amazingly well, considering how ad hoc it was. 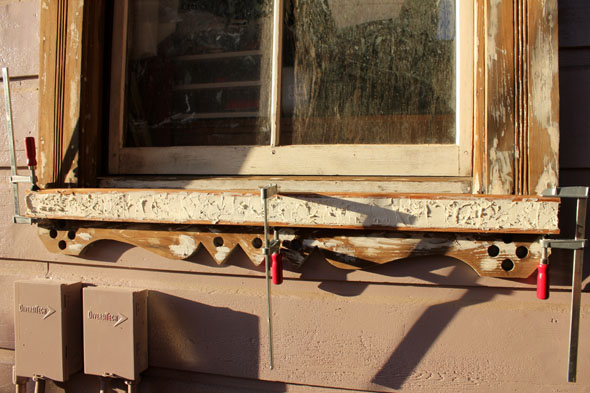 Nevertheless, I could not avoid the consequences of another error I had made: forgetting to coat the forms with mold release agent before putting them in place. The bottom form came off with some tugging, but I had to coax the top form off with a stiff putty knife and a rubber mallet. This didn't go too badly, because the epoxy was harder than the wood of the form, but it did leave something of a mess. 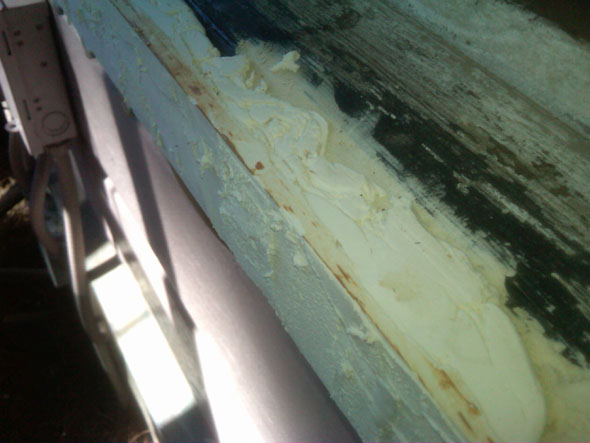 All I can say here is, no lush!
Posted by Otis Criblecoblis at 12:46 AM

Email ThisBlogThis!Share to TwitterShare to FacebookShare to Pinterest
Labels: Procedure