You may have noticed that I haven't posted in a while. This is mostly due to our having been quite busy with various animal husbandry matters, but I have also been slowed by my eyesight.
I have abysmally poor vision. It's entirely correctable with contact lenses, but as I've gotten older, getting the right correction has been increasingly difficult. At times, in fact, my vision has been something of a handicap. A new prescription will take care of things for a while, but soon I'm back in the fog again.
As it happened, I'd gotten a new prescription, from a new optometrist, just before I started the painting project. The timing was fortunate, because he moved me to soft lenses, which handle things like sanding dust much better than do rigid lenses.
By last June, however, I had descended back into the fog, this time worse than ever. I had effectively lost my depth perception, and my mid-range vision (from arm's length out to several feet) was completely out of focus. This combination resulted in my not seeing anything in my mid-range that I was not specifically looking at; my brain simply was not receiving enough information to register it.
And so I began to go through life like a pinball, bouncing off door jambs, tripping over table legs, and stepping on our ever-underfoot pets. Climbing up a ladder or working with sharp tools required my full concentration, lest I do something stupid. This quickly became quite a hindrance, because after an hour or so of this I'd be pretty much done for the day.
I tried to work through this, because I've found that sometimes my eyes get a "second wind" with a prescription, and my vision comes back again for a while. I just didn't want to take the time to drive across town for several visits to the optometrist until I had at least finished the south side.
Then, about a month ago, circumstances forced my hand. I was up on a ladder in the garage, fetching some boxes out of the rafters, when on the way back down I completely lost track of where I was and stepped off into thin air.
Miraculously, I avoided serious injury, landing in the one soft spot within range, although both my hands got messed up when I landed and heavy things fell on them. I was incredibly fortunate to get off that lightly. Someone up there must have taken pity on me.
Of course, the immediate cause of the injury was simple carelessness; I was not staying within the limitations my degraded eyesight had imposed upon me. Still, the underlying cause was my degraded eyesight itself, and it was just a matter of time until it led me into another tight place. I couldn't count upon being so lucky that time. Since my hands were pretty useless for work anyway, I decided to take some time off to attend to my vision.
I knew my optometrist had a kinda new, kinda now plan to address my vision problems; he'd given me an experimental pair to try out along with the regular prescription. While I found that this new method completely restored my depth perception and brought everything back into focus, I didn't want to be making major changes in the way I saw the world just as I was clambering around a 25-foot scaffold, so I put the change off until later.
Clearly, later had come. Then, I couldn't afford to have my depth perception suddenly restored; now, I couldn't afford not to. Long story short, I went to the optometrist, and several weeks later, I was seeing the world with higher fidelity than I had experienced in many years.
And so I returned to my work with great enthusiasm, exhilarated by the return of the third dimension to my life. My enthusiasm was tempered when I saw what I had been doing in its absence: 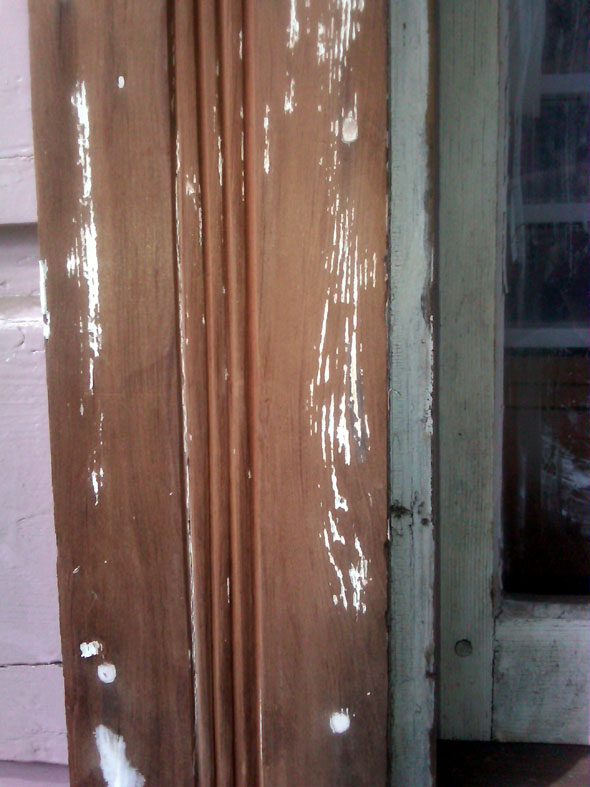 Ouch. Believe it or not, before I got the new prescription I hadn't noticed the leftmost bead going just a bit wide there. Must. . .resist. . . urge. . .to. . .fix. I'd love to go back and fix the mistakes I made while in my purblind state, but I just can't take the time. It'll give me something to do the next time I paint the house.
* * *
Posted by Otis Criblecoblis at 2:42 AM

Email ThisBlogThis!Share to TwitterShare to FacebookShare to Pinterest
Labels: Aside