The next day, I took stock of the progress on the rebuilding of the east casing sash. 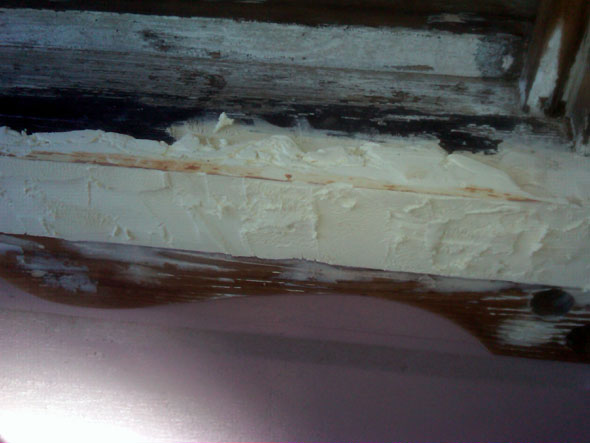 Uh, did I say "progress"? Man, did I make a mess of things! I guess I was just in too much of a hurry. I had tried to use the forms before I had built the sash up enough to provide the proper support for them. I realized that I couldn't determine how to fix this until I had smoothed things out a bit. I filled in the remaining large voids in the top. sanded out the wood remnants and the rough spots, and took some measurements and levels.
As it turned out, the situation actually wasn't bad; the only problem was that I had built the top front edge out too far in places, which was throwing off all the other angles. So I rehabilitated my wood forms by flipping them over and scraping off the remaining epoxy, made sure they had a good coating of mold release agent, and carefully re-clamped them, matching the dimensions of the completed west sash. Once I had sanded off all the putty that projected beyond the forms, it became quite evident where I needed to apply more putty.
Right at that point, I was just about out of putty. Truth be told, my mind has not been on my work these past several weeks; I've pretty much just been putting one foot in front of the other and slogging through, so to speak. I've been mechanically scooping equal amounts of Part A and Part B from their tubs without taking note of how much was left. Honestly, it never occurred to me that I would go through an entire quart of putty on this one casing and still not be done, but that's what happened.
I did have one other issue to deal with during that time: my new contact lenses. After the initial thrill, my eyes and my brain rebelled against the drastic change. These new lenses are huge in diameter, with an abrupt change in profile at the junction between the two corrections; the resulting irritation caused the lenses to cloud up frequently. The odd configuration of the corrections, with close vision coming from the middle of one lens and the mid-range coming from the periphery of the other, baffled my brain for several weeks, and there were many times when neither region was in focus. Thus, for a few weeks my working vision was actually worse than before.
I finally had to start consciously prompting myself where to get focus from for a particular situation, actively training my brain to work with these lenses. Just this week, my brain finally caught on, and now everything in my field of vision is in seamless focus, if still a bit cloudy at times.
I had actually noted my dwindling supply of putty last Friday and had put an order in late that afternoon, but I didn't expect it to arrive until next week, because Abatron is in Wisconsin and I didn't imagine the order would go out until after the weekend. But they really came through for me; they somehow managed to ship the same day, and I got it on Thursday, just when I needed it. Yay, Abatron!
Thus reprovisioned, I puttied the front plane of the sash flush with the forms, and when I took the forms off and sanded back to profile, I found that I finally had all the lines established properly. 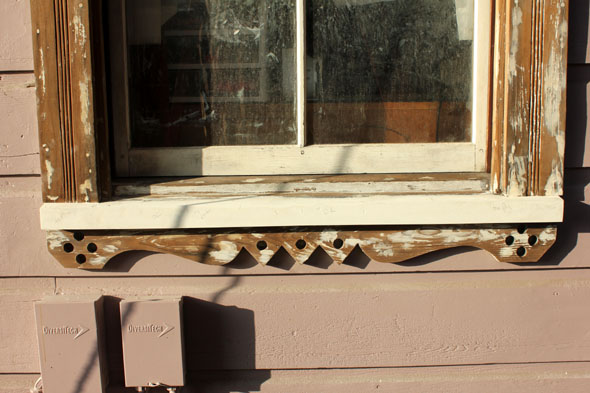 Now, it's a simple matter of filling in the remaining divots and leveling out the top slope. After what has seemed like an eternity, I'm just a few days away from being ready to prime this casing. That is, I am as long as the patching of the cap piece does not present any unforeseen difficulties.
* * *
Posted by Otis Criblecoblis at 1:00 AM